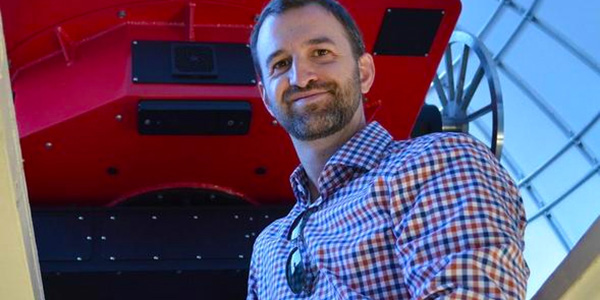 SDSU’s Robert Quimby received a share of a $3 million prize for his work on an investigation into the expansion of the universe.

Fifteen years ago, Robert Quimby, SDSU astronomy professor and director of the Mount Laguna Observatory, was among the first people on earth to realize something staggering about the universe: Its gradual expansion is accelerating.

At the time, Quimby was an undergraduate research assistant working with Lawrence Berkeley National Laboratory astrophysicist Saul Perlmutter on the Supernova Cosmology Project. Perlmutter shared in the Nobel Prize in Physics for the project’s work in 2011. Last week, Quimby and several other researchers who worked with Perlmutter were recognized with the Breakthrough Prize in Fundamental Physics. Quimby will receive a $33,000 share of the total $3 million prize handed out.

Today, Quimby is recognized as a leading researcher in the study of supernovae, particularly “superluminous” supernovae that can flash up to 100 times brighter than typical exploding stars. But during his time as a summer research assistant working under Perlmutter, he was just a number-cruncher, still learning the ropes of advanced astrophysics.

At the Big Bang’s borders

At the time, most astrophysicists thought that ever since the Big Bang, the universe’s expansion had been gradually slowing down, and would likely eventually stop. In that scenario, the calculated omega lambda value would have been a negative number. But that’s not what Quimby found when he ran the calculations.

“I’m one of the first people to be confident that omega lambda is greater than zero,” Quimby said. “But as an undergraduate, I had no idea what that really meant. I didn’t understand the significance of it. It turned out to be bigger than I could have imagined.”

What Perlmutter and others (and eventually Quimby) understood was that an omega lambda value greater than zero meant the universe’s expansion was speeding up.

“It’s like if you threw a ball up in the air, and not only did it not come down, it continued to fly away faster than you threw it,” Quimby explained.

Physicists aren’t sure exactly why this is. It’s one of the biggest mysteries in contemporary cosmology. There must be some currently unaccounted force in the universe that is causing this acceleration, Quimby said, but so far nobody has been able to satisfactorily explain it.

When Perlmutter won the Nobel Prize, Quimby attended the award ceremony in Stockholm, Sweden, but he and many of his colleagues missed out on any official recognition for their discovery.

Last week, that recognition came in the form of a mysterious e-mail that Quimby nearly ignored.

“I got an e-mail Sunday night saying, ‘Congratulations, you have won $33,000’ and I figured it was junk,” he said. “I came close to deleting it, and then I realized it was talking about cosmological constants, which would be pretty unusual for a junk e-mail.”

Shortly thereafter, Perlmutter e-mailed Quimby and the other recipients of the award confirming that they had indeed been awarded the prize. Unlike the Nobel Prize, the nomination process for the Breakthrough Awards is not public, and virtually nobody in the group besides Perlmutter knew they were even in the running.

“It’s an award for the whole team, which is great,” Quimby said. “It’s nice that they pointed us out.”